Start a Wiki
Takasu (鷹巣 Takasu) is an octopus and one of Wakasa's friends,[1] who after hears of his new home he drops in to visit on occasion.

Takasu is an octopus with dark skin, robust complexion and a thin body. He has straight reddish hair and bright yellow eyes. He keeps his hair tied with a green and white scarf. Having 8 arms makes him a very handy guy; he's good with tools and fixing electronics, managing to fix Wakasa's water proof TV with just a screwdriver (after he accidentally crushed it by sitting on it).

In one of Tatsumi's dreams, he is seen with a more serious appearance; his hair is perfectly combed and he took off his scarf.[2] However, it is unclear if this appearance would qualify as canon or not.

Takasu is a bit jealous of Wakasa's new lifestyle, and occasionally tries to prove that he'd be a more useful bath mate to keep- when he's not just hanging around and having fun with the others.[1] Takasu is good with his tentacles, capable of fixing things and giving great massages. Being an octopus, he enjoys cramming himself into dark, narrow places, including Tatsumi's washer,[1] and a Halloween pumpkin.[3]

When they were young, Takasu and Echizen used to be best friends and played together all the time. However, their friendship ended after they met a much older Wakasa and they began to fight over him.[4] Wakasa was oblivious to this conflict. Takasu actually wants to be friends with Echizen again.

Takasu was only invited over so that he could give Tatsumi a massage as a gift from Wakasa, but he gets zapped by a microwave while trying to fix it and Tatsumi can't help thinking about takoyaki when he's around. When everyone gets together to play a card game he's the one who keeps missing all the turns. He's also apparently been chomped on by Agari before. If there's bad luck to be doled out and he's there, you can bet he's going to be the one suffering. 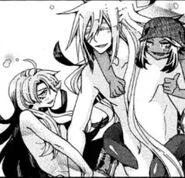 Young Takasu with Wakasa and Echizen.
Add a photo to this gallery

Retrieved from "https://orenchi-no-furo-jijou.fandom.com/wiki/Takasu?oldid=4847"
Community content is available under CC-BY-SA unless otherwise noted.