Start a Wiki
Maki (真木 Maki) is a tiny spiral-shelled snail and one of Wakasa's friends,[1] who Tatsumi saved from some bullying children.

Maki is a small spiral-shelled snail of gray and green color. His body is tiny and he has a very delicate complexion. His dark green hair is long and smooth with slight undulations at the tips. His eyes are purple and he always uses circular glasses.

Maki normally has a self-deprecating, negative personality, but a little kindness brings out a bright, happy snail from his (literal and figurative) shell. He is constantly apologizing whenever he does something "bold" that doesn't pay off, claiming that he's worthless. While at first Tatsumi seems to feel bad for him, at the end of their first encounter it seems he and Wakasa are both a bit annoyed by this habit.

He was rescued by Tatsumi from a pair of young boys.[1] He brings it to Wakasa and it turns out that he is another of his friends. Although Maki had a really negative personality, he impresses Tatsumi by cleaning the bathtub. 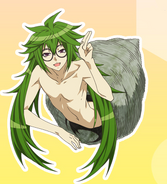 Retrieved from "https://orenchi-no-furo-jijou.fandom.com/wiki/Maki?oldid=4856"
Community content is available under CC-BY-SA unless otherwise noted.